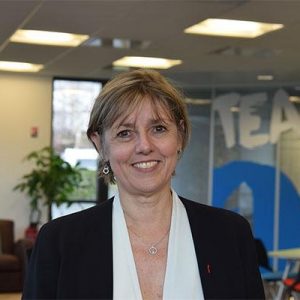 Sylvie Retailleau is a graduate of the « Ecole Normale Supérieure de Cachan » where she
obtained an « Agrégation de physique » in 1988. She received her PHD degree in 1992 in
Physics from Paris-Sud University. She joins this university the same year at the Institut
d’Electronique Fondamentale at Orsay, as an associate (1992) and a senior professor (2001).
From 2002 to 2011, she was the head of the research team “Quantum components for
nanoelectronic” and she developed themes about new concept or new architectures of
components with the aim of the future generations of integrated circuits.
Sylvie Retailleau is co-authored more than 134 articles and 14 invited conferences. She
supervised 11 doctoral theses and sit on 28 thesis committees.
She contributed to the training policy in micro-nanoelectronics at the national level being,

during 12 years, director of the Paris-Sud pole of the national center of training of micro-
nanoelectronics.

From 2001 to 2008, she was responsible of Information, Systems and Technology Master’s
program at Paris-Sud University, co-accredited by Ecole Normale Supérieure de Cachan.
She pays real attention to transfer search-education and training innovation, concretized by
publications and educational softwares. Her passion for training was also reflected by a strong
commitment for a widespread dissemination of scientific culture. She participated in the
creation of the “Diagonale Paris-Saclay” which facilitates dialogue between science and
society.
She was Vice-Dean of Education in the Science Faculty (2008-2011) then Dean of the
Science Faculty of the Paris-Sud University (2011-2016), before to become President of
Paris-Sud University from 2016 to 2018, and President of Paris-Saclay University from 2019.
Sylvie Retailleau is Chevalier de la Légion d’Honneur.