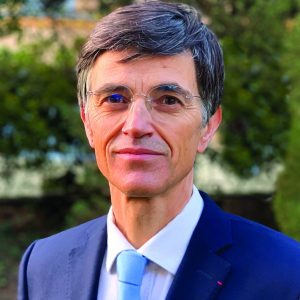 Graduated from IEP (Institut des Sciences Politiques) Paris and former student of l’ENA, François de Mazières began his career in prefectural corps. Chief of staff to the Ministry of Economy from 1993 to 1995, he was appointed in 1995 at the IGF (Inspection Générale des Finances).

In 1999, he was elected President of the National Nederation of elected officials for Culture. At the same time, he became Deputy (Vice) Mayor of Versailles in charge of Culture and created « Le Mois Molière » which became one of the main theatre festival in France.

In 2000, he was Executiv Director of the Heritage Fondation.

In 2002, he was appointed Culture and Communication Advisor by former Prime Minister Jean-Pierre Raffarin.

In 2004, he created the City of Architecture and Heritage, an industrial and commercial establishment, of which he became Chairman and CEO.

In 2012, elected Member of Parliament of the French National Assembly,. Therefor he abandoned his mandate as President of the City of Architecture and Heritage. Member of the Culture Committee, he was one of the main speakers of architecture and heritage law creation and notably proposed the creation of a special lottery draw for the European Heritage Days.

Reelected mayor of Versailles in 2020, for a third term, he chairs Versailles Grand Parc Urban Community which counts 18 municipalities and brings together 270,000 inhabitants.